Between October 1, 2016 and October 2021, I lived in Berlin and worked as a postdoctoral researcher. You may like to read how to first get a life in Germany in my previous post.

A few lessons I learned

Again this time, speaking (even better German) and having taken notes last time, I knew that writing notes this time would help me as well. I also learned a lot in the last year about immigration to Germany and I gathered a few tips.

Before I start here are a few tips for Germany:

You say: but why care?. Well, let's hear from the Auswärtiges Amt themselves:

After 2 years and 9 months you can apply for permanent residence. And if you are not linguistically challenged (i.e. you reached a B1 German level), you can apply after 1 years and 9 months. SO, essentially DURING A 2 YEARS POSTDOC if ONLY you KNEW GERMAN! Did I know about this: NO. Was I informed about this? NO. Did I apply to way to many visas and went to the Ausländerbehörde (Oops, Landesamt für Einwanderung, bitte, Political Correctness arrived somewhere after 2016 on the shores of German bureaucracy)? Yes, I went there way too many times and noticed my privileged consideration due to the color of my skin, my sex, and the fact that I speak German. This experience has gifted me a much greater sense of humility and conscience of the ease of the whole process I'm actually talking about. Bear in mind in the rest of this text that failure at each step is part of the process and that these steps may be repeated several times for every imaginable and non-imaginable reasons. Anyways, Ausländerbehörde experiences would deserve a complete blog on its own (in any country, not necessarily Germany).

TL;DR: Using this Blaue karte, you have access to an early eligibility to plan your long-term future in Germany.

So yeah. You're a postdoc moving to Germany for 2 years? LEARN GERMAN!. I see tons of benefits, but let me say two: unemployment benefits for 9 months (no, not 12! 12 is only for Europeans) and STABILITY. If you are given a permanent residence without much hassle, would you take it? Well, it's your choice, but it is good to know you have that choice!

Go with the flow

So, apart saying goodbye to your favorite döner place, u-bahn junkies, and destroyed shared-bikes laying around, you still need to go through this butt-plug-removal that is letting go of your life here via burocracy. It was also hard and uncomfortable to get there, but after settling in, hopefully it felt better and maybe even nice at time. But now, it's time to move on with withdrawal and the pain associated to it.

Here's a figure which shows some of the hierarchy involved. Each arrow provoked a pain-inducing realization which led to a repetition of the seeked step. Once the figure realized, it seems easy, but getting this order from chaos is rather annoying and sometimes stressful. 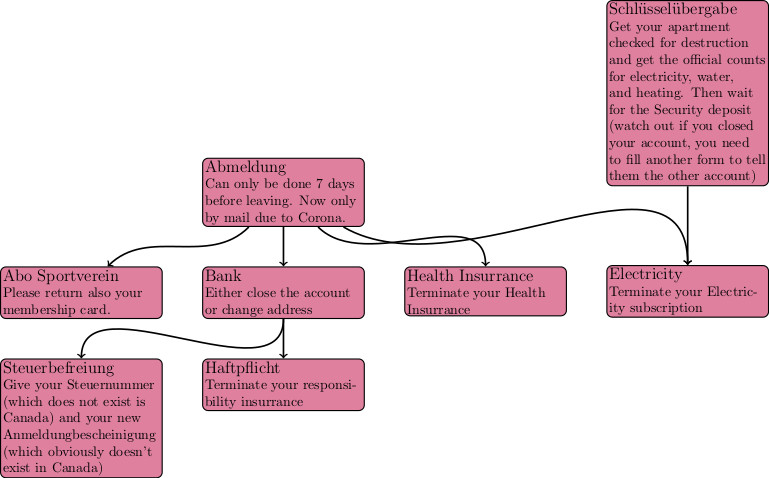 After that, you have to hire a moving company, send your Kündigung for your apartment, get a visit from an electrician to check if you didn't mess up the electricity for the next tenant(!), then transmit your internet subscription to your friend moving in (a huge pain even nowadays). Then, you should tell GEMA that you are moving away to stop paying the TV-tax, then, unregister your Bahnkarte/BVG subscription, clean your office, return the key. You might also want to forward your mail at the Deutsche Post to get the important burocracy (taxes, and this golden universal I-left-your-country-stop-harassing-me card: the Abmeldung). Then, if you receive a pension, tell the VBL that you moved abroad (you'll want your money in 35 years!).

Then... you should be more or less done with ONE side of the burocracy. Good luck! Have fun!